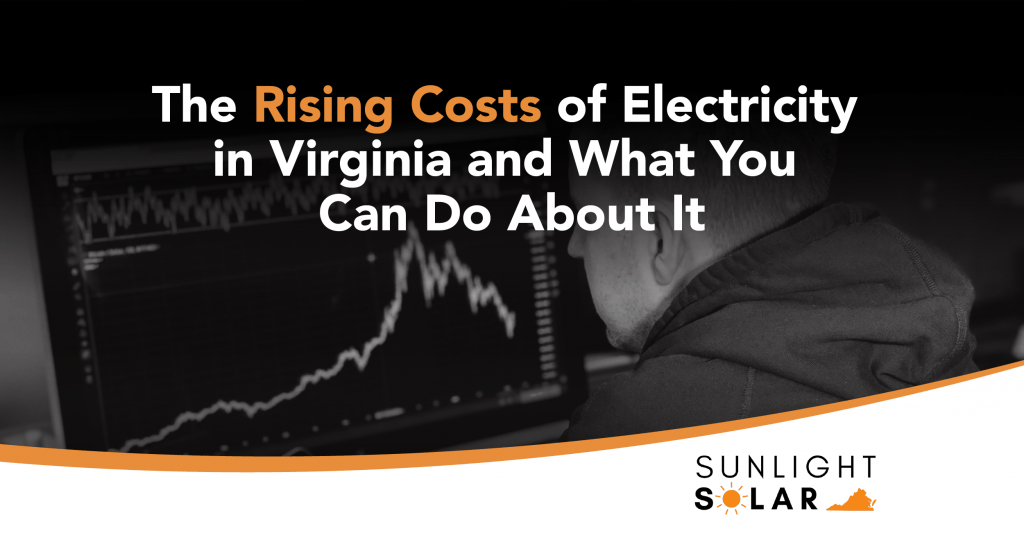 On the upside, we can all be grateful that the COVID pandemic is hopefully coming to its end. However, we’re still reeling from its effects especially financially.

Almost all industries were affected and we are still in the process of gaining our foothold when all of a sudden, the aftermath of the war between Russia and Ukraine hits us at home.

In March, President Biden issued an Executive Order that banned the import of natural gas, oil, and coal to the United States in an effort to significantly reduce Vladimir Putin’s economic resources.

While the US is known to be the largest producer of oil and natural gas in the world, we’re still affected by the global consumer demand, hence the increase in its price, which then becomes a toppling domino chain affecting every commodity.

But the other major reason why Virginia is feeling the heavy burden of high monthly bills is that major utility companies such as Dominion Energy and Appalachian Power are still very dependent on fossil fuels and coal to provide electricity.

It was reported that the current electricity has risen by 13.7% nationwide, a major increase since 2006.

An average Virginian pays around $162 monthly on electricity, which is $1,944 a year! And that number doesn’t even include the surge in the price of other necessities.

Unsurprisingly, Dominion Energy is seeking approval from the State Corporation Commission to raise its fuel factor due to the rise in global fuel price, which will then be paid off by customers, increasing their bills by 12% over the next 2-3 years.

On the other side of the fence, Appalachian Power in April also requested from the West Virginia Public Service Commission to increase its rate, effectively adding about $18 a month to its customer’s bills. According to APCO, this is a result of the increasing global price of its resources.

As of writing, the verdict is still out as to whether these increases have pushed through.

And if you’re a customer of Southside Electric Cooperatives, you may have felt the additional $2.32 per MWh, which began last May 1. According to SEC, ODEC, its power supplier adjusted the price due to higher generation costs which stem from the increase in natural gas price

With all the changes that we’re encountering, we need a backup plan.

How much longer can you carry the weight of the volatile inflation that we’re currently experiencing?

Since we’re powerless against such forces, the next best thing to do is to >control what you can – and the only thing that you can control is your own actions.

What can you do about it?

The simplest thing you can do is to schedule an Energy Efficiency check on your home. In doing so, you’d be able to assess which items factor into your monthly energy consumption.
Unbeknownst to many, some of the most common things that affect your electricity usage is a result of air leaks, poor insulation, and dated appliances.
Plus, checking on the efficiency of your HVAC system will also help in reducing your monthly electric.

If your HVAC isn’t functioning to its maximum standard, it might be time to have it maintained by a professional especially when you need it to function properly during extreme weather.

Using Solar Panels in your home

Now, the best move that you can do to permanently change how much you pay on your monthly bill is by going solar!

This is not news to you, for sure. You’ve seen the growing number of homes (maybe even a couple of your neighbors) making the switch. Perhaps you can ask them about the impact of solar panels on their home and expenses.

Solar Panels derive their energy from the sun and then convert it to electricity that powers your home. This makes you less dependent on electricity coming from your local utility company, therefore lowering your monthly bill!

There are a lot of benefits to going solar, some of which you can read about here.

And finally, Sunlight Solar offers a zero down payment plan so that going solar is more convenient and easier for you.

Make the change today to experience a better tomorrow.

To learn more about Solar Panel installation in your home, give us a call at (804) 452-7699 or send your power bill to Service@SunlightSolarVirginia.com for a free proposal.