Solar Power and the Environment: Pros and Cons 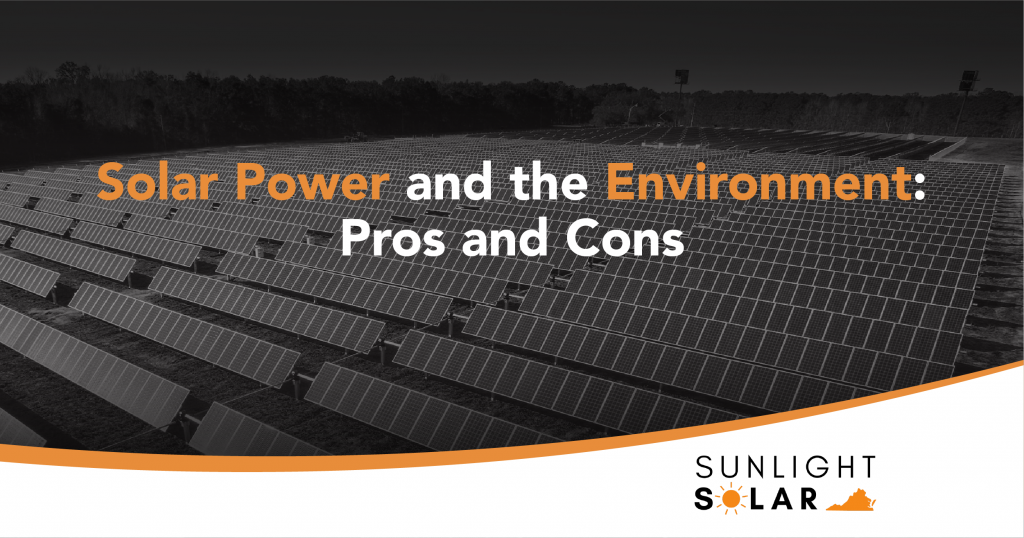 There are always two sides to the same coin. Sometimes, it can be difficult to weigh in and decide which side of the coin you’d rather choose.

In terms of solar power, we always hear how it’s an excellent source of renewable energy and that it lowers our carbon footprint. While these are true, we should also explore how it negatively impacts the environment and what we should expect for the future of solar energy.

The electricity that we receive from the grid is powered by fossil fuels.

Power plants need to burn gas or coal to produce heat that creates steam to power turbines that would then generate electricity. And in the United States alone, we have 3,400 fossil fuel-fired power plants.

Can you imagine how much coal/gas is used daily in those plants to create enough electricity to power cities, businesses, and homes?

When you switch to solar, you’d be relying less on the grid because the power that your panels produce come directly from the sun and it wouldn’t need any other external resources.

Solar is an infinite source of energy

Sunlight is so powerful that it not only provides nutrients for all the plants and the crops that we eat, but it can also provide the energy that we need to power homes, cars, buildings, roads and so much more!

The discovery of solar energy and its subsequent application to become solar power is one of the best inventions of modern times. We should be taking advantage of that.

And the great thing about it is – the sun isn’t going away anytime soon, unlike the raw materials that we use to make fossil fuels. As the population grows, so will the demand for natural resources and therefore the faster we’re to deplete its supply.

When that happens – if we’re still reliant on fossil fuels for electricity, how will we survive?

It doesn’t cause air pollution

For solar energy to become electricity, it will hit the PV cells sandwiched in between silicon materials which will then turn it into DC format. After which, a solar inverter will convert it to AC to power your home’s appliances.

No mess, no fuss.

When fossil fuel is burned in power plants, it produces an unfathomable amount of carbon dioxide that causes air pollution. In turn, this CO₂ also becomes acid rain which lowers the pH of water systems and consequently destroys our ecosystem.

While being a solar panel user does lessen our overall carbon footprint, we have to mention that its production still contributes to carbon emissions.

As the popularity of solar power is increasing, many environmentalists are also concerned with how solar panels will be discarded after their use especially because they are made of heavy metals making them more hazardous and delicate to handle in terms of proper waste management.

At present, there aren’t that many solar recycling facilities because solar panels’ lifetimes reach more than 25 years.

The Future of Solar Power and the Environment

While solar power also has its downside when it comes to being free from carbon emissions, this can change over time.

The environmental issues that the industry is facing today can be solved with technological advancements. There may be ways to recycle old materials to recreate new panels – who knows? We will leave that to the experts.

What’s important today is the positive effect of solar power outweighs its setbacks.

More than that, it is a better alternative source of energy compared to fossil-fueled electricity. This same insight is shared by many resulting in a global movement towards Net Zero.

There is no renewable source of energy that’s truly 100% green because one way or another, they all require to be built using existing technologies, which at the moment will cause damage one way or another. It’s the unspoken rule of growth.

But we do place our hope in solar, its future enhancements, and the positive impact it can create.

If you still have questions about solar power, its impact on the environment, and how you can make the switch, feel free to contact us at (804) 452-7699.

PrevPreviousThe Truth About Solar Panels at Night and on Cloudy Days